I purchased these DH6HD HomeKit compatible dimmer switches from Leviton from February of 2018 (over 1 1/2 years now).

When they work, they are great. BUT! My HomeKit app frequently report these switches with “Not Responding”. The only remedy that I know of is to remove the accessory and then re-add it again.

Today after three tries adding the Leviton without success, I almost gave up. Finally I discovered the following process in this reddit article. Even the technique outlined by the article did not work until I restarted the avahi-daemon.service on my Linux server, figuring that it may interfere with the Bonjour discovery process when adding the accessory.

Using the WiFi setup of the iPhone to add the Leviton device to the WiFi network definitely works smoother than using the Home app. Here are the steps:

Apparently there is a firmware update for these switches. However, the update from 1.4.13 to 1.4.32 fail with the Leviton iOS app.

If you are thinking of getting a light switch for your home automation project, I would steer away from these switches!

On Tuesday of this week, Apple announced the Apple Watch Series 3 with the ability to connect to the LTE data network, allowing the watch to stay connected to the Internet without an accompanying iPhone. This greatly enhances its functionality and removes its original handicap and its requirement to always be tethered to the phone. You can now get notifications and listen to the plethora of songs on Apple Music while on the go without your phone. The future is here.

The watch should be the only device that has the mobile networking radios and should operate in an always on manner, while sharing a personal hotspot via its WiFi radios. The phone and tablets can then function as displays with WiFi connectivity to your watch. This will also simplify your cellular data plans. I just see this as a more convenient setup, and hopefully a cheaper way to go with your mobile carrier.

As memory capacity increases with the watch, personal identity, application data, and other confidential information can be stored on the watch akin to the secure enclave on the iPhone today. This way display centric devices slaved to the watch can restore your last working state from the watch. Imagine a world where display slates are near commodity devices sans your personal information. You can be working with a shared slate in the office. All the while, your data is being centralized and stored securely on the watch. When you travel offsite at the airport or in the hotel, you pickup another shared slate, and you continue to work where you left off.

It is also more difficult to lose your watch than your phone. When you do misplace your phone and cannot find it, then just pickup another, because your personal data is stored on your watch.

Power consumption is probably going to be a major challenge for the watch in this scenario. But if the power challenge can be solved, then imagine having only WiFi display slates of any size of your choosing, and your watch has the only mobile data radio you will need. Instead of the phone being your most personalized information device, it will be your watch. I hope Apple has this vision in mind. Do you believe this to be a better future? 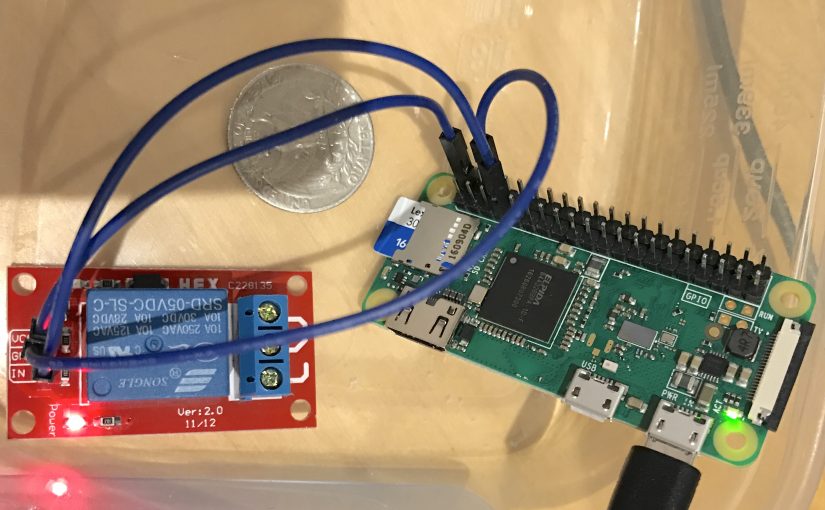 Last weekend I spent my time configuring the Raspberry Pi 3 Model B to trigger a relay. Tonight, I finally took the time to solder the 2 x 20 pin headers to the Raspberry Pi Zero W board. I wired it all up again and took a photo with a quarter coin, so you can appreciate how small the circuit is.

I had to make a minor software adjustment, because the Node.js version that I installed on the Pi 3 did not work. Apparently I had to get the armv6l version instead of the arm7l.

After a quick re-install from the above link, I was back in business.

Now I’m going to test the stability of the WiFi on the Pi Zero, before I make the final security touches to the software and then to the garage door opener!

Two years ago I started to tinker with the Arduino platform and created a simplistic garage door opener by coupling a fairly inexpensive Leonardo board with a even cheaper ESP8266 WiFi board. It took quite a bit of work, figuring out how to configure the WiFi with the ESP8266, and struggling with its unreliability. I also wrote a little iOS test app so that I can control the garage door opener with my iPhone.

After numerous hours and a total bill of materials for less than $20, here is a short video on the fruits of my labour about a couple of years ago:

I have been tracking the Raspberry Pi platform for quite sometime, but always found them to be comparably expensive to the Arduino boards, especially all I needed was something to get on my WiFi network, and be able to respond to a remote request to effectively flip the proverbial switch. So when I found out that you can get a Raspberry Pi Zero W for $13.45 CAD at CanaKit.com, I was pretty excited to give it a try.

I purchased the Pi Zero W as well as the Pi 3 Model B. Why not?

Spent a good chunk of yesterday to:

After the above, the Pi board just needs power and nothing else, and I was able to establish an ssh session from my Mac to continue on with the configurations.

Once I have my development environment all setup and that all the networking stack is working properly. I can then start to play with the GPIO pins that came with the Pi. The idea is to provide a simple web service app powered by Node.js and Express to turn on or off or simply toggle a GPIO pin, acting as a switch, which I can hookup to a relay.

I first downloaded the wiringpi package.

I used the above package to get familiar with the GPIO mechanism and play around with it on the BASH command line.

Once I was comfortable with the concept, I wanted to hook it up with the Express app which I did with the onoff npm module. I spent this morning creating a simple Swift iOS app, and wired the Pi to the relay.

You can see it all working in the video below. When I press the button on my test app from my iPhone, you’ll see the red LED blinking denoting a pulse on the switch — think of this as you press the garage door opener. The yellow wire is the USB cable that is just feeding the board with power. Thrilling!

I am not finished yet. I still have to make the iOS app and web service more secure and switch from the Pi 3 to the Pi Zero, but not this weekend. However, my initial impression of the Raspberry Pi platform is much simpler for me, coming from a software background. My hardware skills are at best rusty from my university days. The micro controller environment of the Arduino platform is also very finicky and more difficult to debug. There is nothing like working with a real operating system with a mature development stack.

I also used my wattage meter to figure out how many watts the system was drawing, and it only peaked at less than 3W. That’s pretty good!