On the Maslow hierarchy of needs scale, Hong Kong currently share many of its basic needs with the mainland, including food, fresh water, and electricity. The end game of these protests should give due consideration to these geographical dependencies. Even if a political divorce is possible in the long run, it will be really difficult to live independently when you are still forced to share the same bed.

A symbiotic existence between Hong Kong and China seems to be unavoidable, as such finding common ground seems to be a better approach than inflammatory tactics based on hate and violence. The latter dehumanizes the opposition and ironically for all people of Hong Kong, erodes the one of the core values of a democracy, basic human rights. This is the same value that the protestors are advocating for.

Observing from recent history, it is really hard to pinpoint a country involved in the Arab Spring events that are better off now than before. Perhaps conciliatory talks can give rise to more creative possibilities of coexistence, and the elixir of democracy does not have to be the only arrow in the quiver to achieve peace and prosperity.

I purchased these DH6HD HomeKit compatible dimmer switches from Leviton from February of 2018 (over 1 1/2 years now).

When they work, they are great. BUT! My HomeKit app frequently report these switches with “Not Responding”. The only remedy that I know of is to remove the accessory and then re-add it again.

Today after three tries adding the Leviton without success, I almost gave up. Finally I discovered the following process in this reddit article. Even the technique outlined by the article did not work until I restarted the avahi-daemon.service on my Linux server, figuring that it may interfere with the Bonjour discovery process when adding the accessory.

Using the WiFi setup of the iPhone to add the Leviton device to the WiFi network definitely works smoother than using the Home app. Here are the steps:

Apparently there is a firmware update for these switches. However, the update from 1.4.13 to 1.4.32 fail with the Leviton iOS app.

If you are thinking of getting a light switch for your home automation project, I would steer away from these switches! 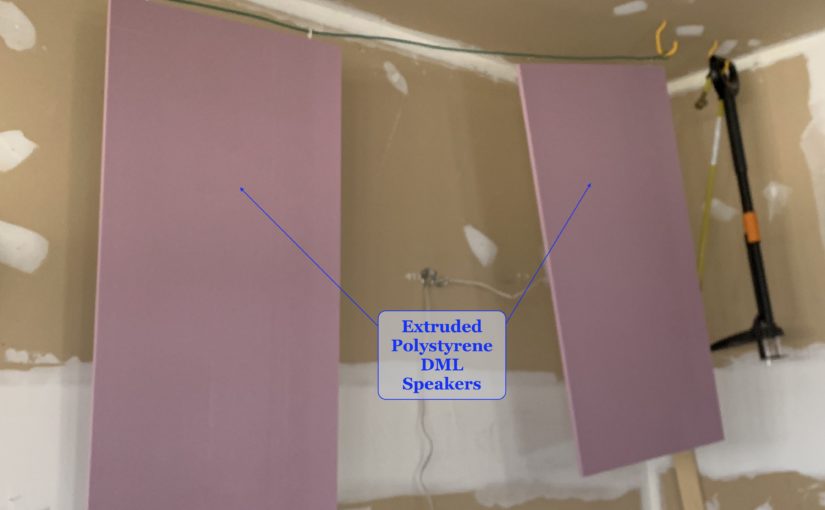 I wanted music in my garage when I am cleaning my bike or doing some other work. However, I did not want to spend a lot of money but I also wanted to make sure that it sounded okay.

I was couch surfing one day and came across this YouTube video.

The video talks about joining audio exciters to extruded polystyrene boards, traditionally used for insulation. I was intrigued.

I purchased a pair of DAEX25TP-4 by Dayton Audio from solen.ca. They look like this:

I joined these exciters to FOAMULAR CodeBord Extruded Polystyrene Rigid Insulation which I purchased from Home Depot. I simply purchased a 24″ x 96″ and cut them in half so that I have a pair.

I had an old Airport Express lying around which I can use as my source material by piping Apple Music through it. Here is the end result in my garage.

For less than $100, the sound is loud and good! The low end can be improved with a sub, but I won’t be doing that since this will be rarely used. The next step is to install some shelving and hide the wires so it is more presentable.