On May 17th, 2017 a Mauritian Chinese newspaper, Hua Sheng Bao (华声报), published an article on how my maternal grandfather Wu Tao Xing (吳桃興), also known as Ng Thow Hing to all of my relatives, reminded us all how my grandfather participated in the formation of a mutually prosperous China – Mauritius diplomatic relationship that lasted until today.

I personally have known bits and pieces of the story, but this article apparently written by family members of my grandfather shed more depths to how he was instrumental to the founding of the Chinese Embassy in Mauritius.

It is too bad that the newspaper does not have a web site, at least none that I can find, but one of my cousins from Mauritius was kind enough to provide a photo of the original article which I’ve included here. Below the original I also provided a translation that my beloved wife was patient enough to do with me. 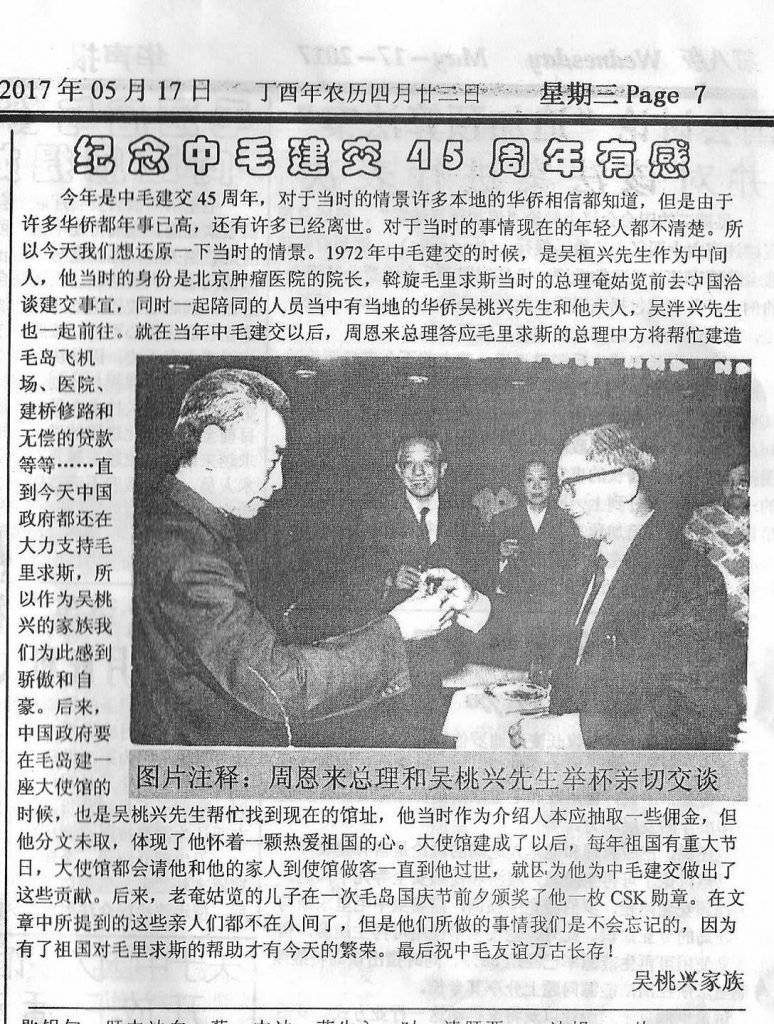 This year marks the 45th anniversary of the establishment of formal diplomatic relationship between China and Mauritius. At the time when the agreement is still being established, this is a momentous event amongst the Chinese expat from Mauritius. A new generation of Mauritian Chinese are now among us, many of whom are not aware of such an occasion and how important it was to Mauritius. This story is worth retelling for those new generation.

In 1972 when the agreement is reached, Mr. Wu Huan Hing 吳桓興 (Gong Gong’s brother), Director of the Beijing Cancer Hospital, acted as the facilitator and arranged for the first Prime Minister of Mauritius, Sir Seewoosagur Ramgoolam, to come to China to discuss the possibility and development of diplomatic relationship between China and Mauritius. Mr. and Mrs. Ng Thow Hing 吳桃興 (Gong Gong and Po Po), and Mr. Wu Pan Hing 吳泮興 was part of the Mauritian delegation during the visit to China.

Once the relationship is established, the Chinese Premier Zhou Enlai 周恩來 promised to assist in the creation of the Mauritian airport, hospital, and subsidized in other infrastructure improvements. The success of this relationship continues today and China is still a prime benefactor for Mauritius. As a descendent of Mr. Ng Thow Hing 吳桃興, we are proud that this heritage is part of our family history.

The son of Sir Seewoosagur Ramgoolam presented the CSK Medal to Mr. Ng Thow Hing 吳桃興 on the eve of the Mauritius Independence and Republic Day. A large part of Mauritius prosperity can be said, is owed to China’s assistance a direct result of the very same diplomatic relationship that Mr. Ng Thow Hing, 吳桃興 help to forge. All the key individuals mentioned in this article have passed away. As descendents of Mr. Ng Thow Hing, we will never forget how he was instrumental to the successful diplomatic relationship which both countries enjoy until today.

I believe the picture below is a photo of him sporting the CSK medal that was mentioned above. 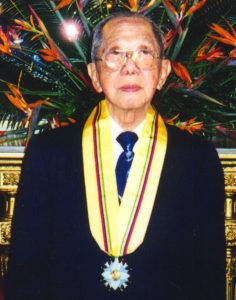 I may not share his surname, but needless to say that I still feel quite proud to be within his lineage! I personally will not forget the deeds he played in Mauritian / Chinese history, and I will do my best to share this momentous event with my kids.

The post was from Roland Tsang Kwai Kew, he effectively provided some explanation and clarity on where the article that we based our translation may have been sourced from. Here is a related article from Le DefiMedia Group.

I really appreciated the fact that he attempted to get hold of me via Facebook. It is really good to find out that that someone out there is preserving, observing, and recording the Chinese Mauritian culture as well as the Sino-Mauritian connection.

3 thoughts on “A Mauritian Legacy of my Grandfather”