Today I will be talking about the beginning of the TV.

The Electronic television made its first appearance on September 3, 1928, to the public. The inventor of the TV was Philo Farnsworth. Philo actually 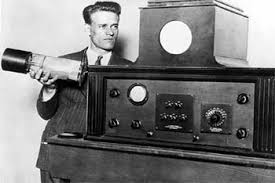 didn’t even come up with the idea. The Idea for TV came from a German man named, Paul Julius Gottlieb Nipkow. Paul came up with the idea in 1884 and experiments started in 1922. The idea was, there was a disk with holes in it. The holes would scan an image and produce an image. Those kinds of TV would come to be known as the Mechanical TV because of the spinning disk.

Over the years, with advancement in electronics, Mechanical TV got replaced with the electronic TV. Philo cam 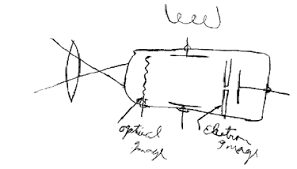 e up with the idea of the electronic TV in high school. Basically, the idea for the electronic TV was that a cathode ray tube would fire electrons into an image row by row. The electrons would be sent through a cable, and the electrons would be fired against a screen, and project an image on the other side of the screen. The images on the screen assembled into fluid motion because it was happening very fast. However, when Philo finished his prototype his rival Vladimir Zworykint also finish his prototype. This eventually led to a court fight for the tv rights. The deciding piece of evidence was a photo of Philo’s first concept idea he drew in school. Soon the first TVs would soon be massed produced in the 1900’s.

Next, I will talk about the problems with mass producing the TV, and the innovation of colour TV in my next blog.

It is 2017 and very soon I will make the big transition to high school. A big part of high school is the courses and in this blog, I will talk about the courses I will take.

For math, I definitely will take Academic math. I came to this decision because of my parents and the fact I would like to go to a university. Academic math will be more fast pace and you need to be more independent than the Applied math. However according to what one of my friends, he said Academic and Applied math are the same? either way, I’m going to take Academic math.

For language, I’m also going to take the Academic course. I decided this because my parents wanted me too and I want to get into university. I actually didn’t have much background knowledge of Academic language so I did some digging. After I read this article from peopleforeducation.ca it makes me want to take Academic even more. Turns out A provincial study showed that only 21% of students who took applied courses in grade 9 went on to college after graduating. I got this fact at peopleforeducation.ca by the way. So I’m definitely going to take Academic for this course.

The past week I received my new G.SKILL keyboard and since then I had ample time to use this new keyboard. So here are my thoughts on the new G.SKILL Ripjaws KM780.

The reason I got a new keyboard in the first place was because my old keyboard was an Apple keyboard. Whenever I played FPS games, using the Apple keyboard felt weird to me. The new G.SKILL keyboard feels much better. Some feature my new keyboard has my old keyboard doesn’t have are brown cherry MX switches, RGB lighting, six customizable macro switches, a clip that holds on to wires to reduce wire slack and a very interesting sound scroll wheel.

Although this keyboard is amazing there are still some flaws, since this is G.SKILL’s first attempt at a keyboard. For example, the control software that controls the keys and RGB lighting is confusing and hard to use. I had to watch multiple videos just to grasp the RGB lighting control. I think G.SKILL can improve this software by adding confirmation pop-ups, multiple presets, and automatically apply new lighting setups.

Overall the new keyboard is great and I don’t see anything that bad about the keyboard besides the software. In the future, I hope to expand my experience with the keyboard and master the confusing software.

I recently went to Sushi Aoy and I had a thought, which of the three sushi restaurants I go to is the best. Beside Sushi Aoy, the two other restaurants are IPad Sushi and Ichiban Sushi Richmond hill.

The place we go to the most is IPad sushi since it is the closest to our house and in my opinion, that’s a good thing. Also if I really wanted to, I could walk there. Some of the pros in my opinion are, it’s close, foods decent, and it’s all you can eat. Some of the negatives are the foods is not the best quality and the place sometimes gets crowded. Overall I probably like this one the most.

The second place is Ichiban Sushi Richmond hill and the reason we go here is because daddy prefers Ichiban over IPad Sushi. The reason for that is because Ichiban has better quality sushi than IPad Sushi. Some other pros are that it not too far and they has a good menu. Some negatives are its a bit small compared to IPad Sushi and Sushi Aoy. Overall the place was alright, and we do go every now and again.

The third and final place is Sushi Aoy. I’ve only been there once but it seems their menu is pretty good. Some other good things about Shushi Aoy is its good interior and their food should be better quality than IPad Sushi. Overall it’s decent but I haven’t been there enough to place a score on it yet.

In the end, that was my opinions and thoughts of the different sushi restaurants I go to.