A few years ago, my mom bought an Apogee ONE from a music store near us. The ONE is an audio interface used to record music. She used to use it for recording vocals, but recently she wanted me to record myself playing the guitar with it.

The ONE has a built-in microphone, but also allows you to plug in an external microphone and/or an instrument like a guitar. Yesterday, we were able to connect the speaker output to the stereo in my room so that when I play electric guitar it’ll come out through the speakers. I was able to record acoustic guitar with the built-in microphone, but my mom also found a condenser microphone so I was able to use that as well. So far I’ve only used the interface with my phone, but I know that it’s possible to download the Apogee software onto a computer. When using the interface you can change the input volume, the line outputs, which inputs to use, etc. After checking the settings in the Apogee app I used the GarageBand app on my phone to record the audio. I’ve tested recording both electric and acoustic guitar, but when I play the electric guitar there’s a bit of static or hum in the background even if I’m just playing clean guitar. I’m not sure whether or not it has anything to do with the ONE or if it’s just the cable though. Otherwise, the acoustic guitar sounds just fine using both the built-in microphone and an external condenser microphone.

After using the interface I’d say it’s pretty good since it came with almost all of the cables that I needed to use. I plan on at least trying it out with my Mac, but I also know that if you put in some batteries into the interface it’s portable. I’m interested in seeing how that would work.

This week my school held it’s annual track & field. Since I’m in elementary school we have nine events being standing long jump/broad jump, running long jump, triple jump, shot put/ball throw, 100m, 200m, 400m, 800m, & 1500m. I signed up to participate in all of these events except the 1500m since I don’t really like long distance too much.

The meet was supposed to be on Tuesday, but the weather wasn’t good so it was pushed back to Thursday. Our day was split into separate sections for different events. Usually, we would have all of our events and then possibly a rest period if we had spare time. However, this year our gym teachers decided to have our standing long jump & 2oom in our gym periods prior to the meet in order to save time. Unfortunately, not all of the intermediate students, which includes me were able to do the 200m before. Because of that, everyone had to do it again at the very end of the day.

At the start of our day, we had over half an hour of rest time before we actually started any of events. Personally, I think this was a pretty unfortunate thing to happen since I wouldn’t get to rest when I’d actually tired but wasn’t much  I could do about that. Since our school just finished with track & field yesterday I only now some of the results. I’d gotten first in all of the jumping events even though for running long jump I’d faulted my first jump but they still counted it. If they hadn’t counted my first jump I’m pretty sure I would’ve gotten second since we only got two jumps and my other jump wasn’t as good. I had also gotten third in the 1oom and from what other classmates have told me, I’d placed within top six for shot put. For the track events, it’s kind of hard to guess how well I did until the official results are released, but I don’t think I did too well in any of those.

Overall, I had lots of fun and I’ll get to go to the area track & field meet that takes place at a high school nearby where some other elementary schools gather to compete. I’m looking forward to the area meet mostly because I don’t have to go to school for a day, but I’ll still try my best to do well.

Earlier this week, Epic Games released a new Limited Time Mashup which also involves the latest Avengers movie which came out last week. In this game mode, a meteor lands on the map and drops the Infinity Gauntlet which has all six infinity stones on it. If you pick up the gauntlet, you will transform into Thanos who is the main antagonist of Avengers: Infinity War and have different abilities to use.

Any player can pick it up, but will have to drop all of their items, won’t be able to build, go through doors, or use launch pads. Originally on the day of the release, while transformed as Thanos you’d have 300 shield and 700 health. Your shield will replenish after every kill, but your health cannot be replenished though. However, as of now, you’ll only have 200 shield and 800 health. As Thanos, you don’t take fall damage and you have four abilities to use. Your first ability allows you to punch and it destroys walls, floors, and ramps in just one hit. The second ability allows you to fly towards the ground if you’re in the air and does the same effects as the first ability. The third ability allows you to shoot a beam in the air or on the ground that deals damage although you are immobile whilst doing so. Your last ability allows you to jump higher than normal after a charge up effect. There are a few other changes to weapon drops and things like that, but you can read more about it on their patch notes page here.

I haven’t gotten a chance to play this game mode yet but it looks pretty interesting. If you’re worried about spoilers for the movie by playing this game mode I don’t think you have to worry since most of the things featured are already common knowledge within the Marvel community.

This week Epic Games (developers of Fortnite) released Season 4 to the public. In Fortnite Battle Royal which is the more popular version of the game right now, there are seasons that last when they’re in effect you can buy a Battle Pass which allows you to get cosmetic items as you play the game. Also along with the new cosmetics, there are usually changes to the map. Last season was Season 3 which added a few extra places on the map but they weren’t as drastic as Season 4’s.

There has been a whole lot in the past few weeks of comets and meteors hitting specific places and you can probably search those theories up on Youtube or Google. However, most theories suggested that a comet in the sky would end up striking Tilted Towers which is a popular landing spot for lots of players. Most of these speculations were actually incorrect though despite the loads of evidence that could be found to prove it. Instead, it seems like the comet turned into a meteor and hit Dusty Depot which wasn’t that good of a landing spot (in my opinion) even though it was named on the map.

Dusty Depot was changed drastically with the area around it creating a crater. It is now named “Dusty Divot” due to it being a divot in the ground. Inside the crater, there are Hop Rocks that can be consumed by a player and allows them to jump a little higher than normal for around 30 seconds although I’m not sure if they are able to be stacked on top of each other if multiple are consumed at once. It seems like there are facilities and other things like that scattered around Dusty Divot, but I haven’t been able to go in-game to check it out yet.

Overall I think these changes have granted the game more media attention than usual which is already a lot. However, I also think that these changes will keep players interested with something new. One thing that just for my friends and me might be disappointed in is that on the damage from Dusty Divot too South-East with it being just a little tail next to the circle of damage. Before the update, my friends and my somewhat favorite landing spot was an unnamed location in between Salty Springs, Retail Row, and Dusty Depot. However, due to the extra tail from the circle of damage, it’s now no longer there which kind of disappoints me. 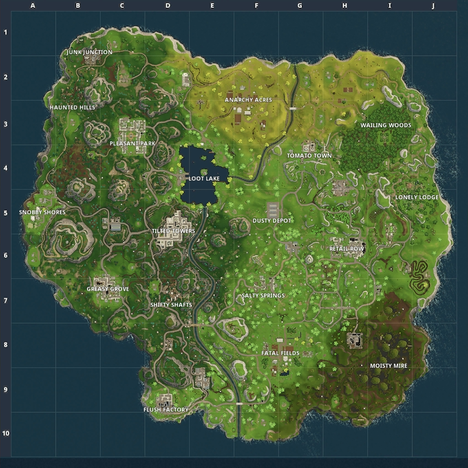