Last Monday on April 23, Alek Minassian drove a rental van down Yonge Street killing 10 people and injuring at least 13 more. This week I will be writing my thoughts and opinion on this incident.

The deceased victims’ ages ranged from 22 to 94. Two of them were foreign, one being a Korean international student and the other was a Jordanian citizen visiting his son. I’m sure the families and the public were very shocked with the incident and the families that were directly affected have my condolences. Slowly, the area of the scene is returning back to normal, but even then we should still remember that these types of things can occur and we should remain vigilant.

As for Alek Minassian however, he cannot be forgiven for what he has done and it is still unclear as to what his motives were. Another thing to consider though are the parents of the suspect, Sona and Vahe Minassian. So far the Minassian family has been trying to keep attention away from themselves, but Vahe Minassian was in the courtroom when charges were pressed. Soon after he left reporters and interviews surrounded him, but he only replied with “I’m sorry” to the questions. It seems like the parents also don’t understand why their son did what they did, but if I were them I would ultimately feel responsible for the actions of Alek Minassian.

Overall, this was a tragic incident that doesn’t seem to happen in very often in Toronto and when you think of attacks you don’t really think that much about Toronto or Canada in general. However, I think this is a reminder that these types of incidents can happen anywhere and that we should all take precautions and stay safe.

Yesterday it was just announced on the Counter-Strike Blog that Dust II, one of the most popular maps in gaming is now back in the Active Duty Map Pool which is a group of maps in which professionals play on and the most played maps in general. Dust II was originally always apart of the Active Duty Map Pool until Valve decided to take it out to make some changes. Therefore, taking it out and replacing it with Inferno which was another classic Counter-Strike map.

Whenever a map is brought it, another one is taken out. This time it was Cobblestone which I don’t really play for a few reasons. Cobblestone is a decently old map even though it has had some minor changes over the years. I know a lot of people like to play Cobblestone, but for me, it’s a bit awkward to play. As a Counter-Terrorist, it has different angles that are difficult to hold with a lot of height differences. I feel like this is a reason why they took it out because months ago a new map was released called Canals. It was very different than most other maps since like Cobblestone there were lots of height differences. Canals now is alright, but even now not too many people play on it. Personally, I already felt like Cobblestone was a bit different from other maps and that we didn’t really need another one like it.

Most of the time when maps are taken out of the map pool means that Valve’s making changes to it. For example, Dust II was brought out and had changes done to it mostly visually but changes none the less. Nuke was brought out and also had changes made. Cobblestone takes place in a castle sort of environment so I’m interested to see if they’ll change it or how they will if they do.

Overall, I’m interested in seeing how the pros will play the new Dust II and seeing how the changes will affect their play. However, I think the most interesting thing for the community now is going to be Cobblestone since changes to maps usually cause a stir in the community especially if they’ve remained the same for a while.

In the past couple of weeks a game I’ve been playing, Fortnite, has made a few additions to their Battle Royale game mode. A few weeks ago I made a post on the game. I’ll be writing about three things which are the Guided Missile, vending machines, and Port-A-Fort. So far I have gotten a chance to play with the Guided Missile and the vending machines, but since the Port-A-Fort just got added I haven’t gotten a chance to check it out. Even though I haven’t used the Port-A-Fort yet I’ll still write about what I think from what I’ve seen.

The Guided Missile was added two weeks ago and used the same ammo as the rest of the explosive weapons which are rockets and were a bit harder to find than normal rocket launchers. The way they worked was that you could shoot a rocket and then pilot it for a certain period of time until you decide to just let it continue in the direction it was last facing, you ran out of time, or you hit something. While piloting the missile you are vulnerable though. Since you were able to pilot the missile around walls and through windows, if you aren’t paying attention then you could easily get killed if someone used it against you. At first, it seems a bit overpowered but you can still build right before it’s about to hit you or just shoot at it to destroy it. Another thing people started doing with it is rocket riding yourself. Previously if you had some friends you could stand on the edge of a ramp or door and some shot a rocket underneath you or you jumped onto the rocket you would be able to ride the rocket until it explodes. With the Guided Missile you can now easily shoot the rocket and pilot it so that it goes right under you and now you’re riding the rocket and piloting it at the same time. This isn’t too useful in most situations but some people have made it work.

The vending machines were added around a week ago and they could be found at certain locations sometimes. They would have a certain rarity just like weapons like grey, green, blue, and etc. Depending on the rarity you could exchange building materials for things like weapons, shields, and traps. Sometimes you’ll find a good deal and sometimes it’ll seem like a complete scam. You don’t have to use them, but if you find one with a nice item like a legendary SCAR for 500 wood you might want to find some trees or decide that it’s not worth the time. For me, I’ve used them to get mini shields and assault rifles if I don’t have one, but other than that I don’t use them too often. There are always three items for each vending machine and for the three different materials in the game wood, brick, and metal. At least for me, I don’t get anything that is for metal unless the item is really good since most of the time metal is pretty hard to get compared to wood.

The latest addition to the game was this week and it’s the Port-A-Fort which is basically a grenade you throw on the ground and it builds a fort. From what I’ve seen it is always made of metal and is always the same shape with it pretty much being a one by one with tires at the bottom and a funnel at the top so you can go up easily using the bouncy tires. I think they should’ve made different rarities of Port-A-Forts so there’d be a wood one, brick one, and a metal one. The reason for this is that even though metal has the most hit points it is the slowest to build which means that if someone shoots at it while building it’ll actually be destroyed faster than wood. I guess you’d have to strategically place the Port-A-Fort when nobody’s around, but generally, I don’t feel like it’ll be really useful to me.

Overall those are my thoughts on the recent Fortnite additions, I think that the Port-A-Fort could use a little bit of changes, but I think the rest of the features are nice additions to the game.

This week on Easter Monday, my Mom, brother, and I went to a Korean fried chicken restaurant called The Fry they have a few restaurants around Toronto, but recently they opened one pretty close to us. They had quite a variety of fried chicken, but since there were only three of us we ordered just two variants. We chose the ‘Boneless Chicken with Green Onion’ and the ‘Original Fried Chicken’. Along with the chicken we also ordered a side of onion rings. Already included with the chicken was some sweet corn and a side plate with three different vegetable/salad items. 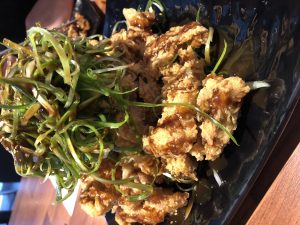 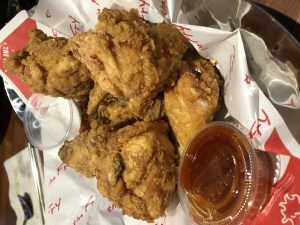 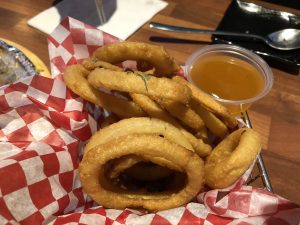 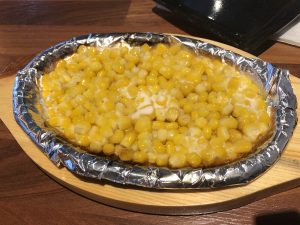 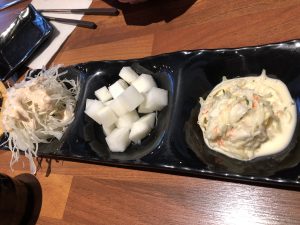 Overall I enjoyed the experience at The Fry and would recommend it to anyone who is interested in trying some different types of fried chicken. We still haven’t tried much of their menu, but if we do go back then I think we would try to experience the other varieties of chicken they serve there.