To me, the Apple Watch feel less bulky on the wrist.  I always find the Garmin Swim a bit too bulky for my taste.  During the swim, the Apple Watch shows time, cal, lap and distance.  It does not show heart rate during my swimming workout.  I am not sure if you can select what data to be displayed on the watch during workout.  On my Garmin Swim, I can choose what data I can display, and I chose time and distance.

After the workout, you can review the stats on your iPhone using the Activity app.  The photos below show the stats you get with Apple Watch versus Garmin Swim.   The total time registered on both devices are about the same.  Garmin gives me higher len/lap count but it is normal for the Garmin Swim to give me 3 extra laps.  My guess is the Apple Watch registered one to two lengths less than actual.  Total calories is about the same, with Garmin being slightly higher than Apple.  I think it is because of the 5 extra length counts on the Garmin.  Speed is a bit slower on the Apple Watch.  The Activity app shows my average heart rate as 139 BPM but the Garmin Swim does not provide this information.  However, Garmin Swim gives you other stats that Apple Watch does not provide such as SWOLF (“Swim Golf” , a score obtained by adding together your strokes per length, and the time for the length) and the number of stroke per length.  I rarely look at those data though. 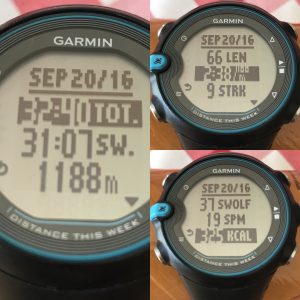 I noticed two short comings when using the Apple Watch as a swim watch.  First, the Apple Watch’s screen go blank during the swim while the Garmin Swim stay on during the entire swim session.  I like to check my len/lap count or distance when I reached one side of the pool before I turn.  With the Garmin, I will just steal a glance but with the Apple Watch, I have to tap on the screen to wake it up.  For me, this is my first and biggest complaint.  Second, it is difficult to pause the Apple Watch during the middle of a swim session.  With the Garmin Swim, you just press a button and it pause.  With the Apple Watch, as soon as you start the pool swim workout in the fitness app, the watch screen will lock.  You have to press and turn the crown to blow out water and unlock the screen before you can pause or stop the workout.  It does not bother me too much because I usually don’t stop in the middle of my swim session but I think the pause feature may be important to some swimmers.

Overall, I like the Apple Watch Series 2 as a swim watch.  It is less bulky to wear and it provides pretty accurate lap count.  Also, it provides heart rate information.  Although I prefer getting the heart rate information during my workout rather than after the fact, it is better than not getting the data  at all.  Another benefit of using the Apple Watch as a swim watch is that my swim workout data get recorded in the Activity app and added points to my daily activity goal tracker automatically.  No syncing or importing data is required.  I am happy with my Apple Watch Series 2 and I think you will like it as well!